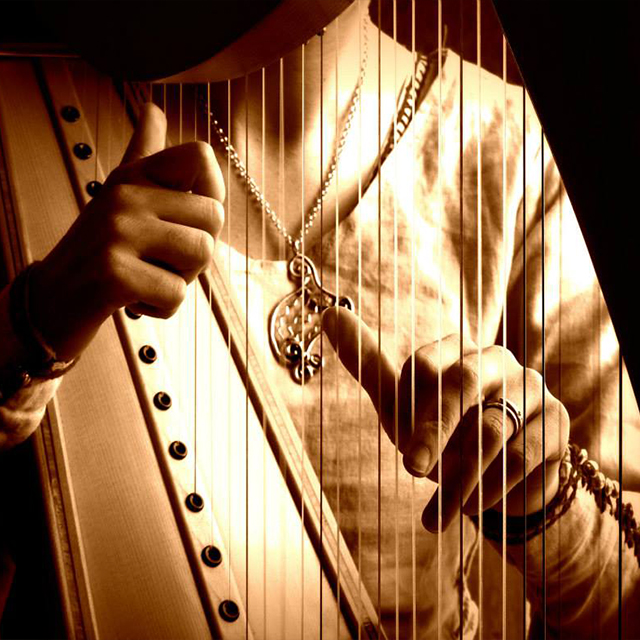 Mélanie Bruniaux also known as Anima Keltia is a Celtic and Medieval music harpist. She was born in Belgium but she’s currently living in Italy.

When she was a 8 year-old girl she happened to step into a church where a harp was being played. For a well hour or two little Mélanie stood utterly entranced and speechless in front of that instrument, captured by the haunting sound of those magical strings. Playing the harp has become her fascination and her main purpose in life since. Saba Ferrari describes her music and her artistry in a very poetic way: “The strings of her harp, plucked and caressed, bring to mind the fairy woodlands, mischievous goblins, nymphs and underwater cities, taking us in a magical world of poetry”. Actually, she also looks like someone who has just popped out from a Celtic fairy-tale.

Anima Keltia first official album titled “Vita Dominae. Medieval and Renaissance Music” (on label Maxy Sound) will be released on the 26th February 2016 and it will comprise Medieval and Renaissance music performed on Celtic Harp (Mélanie Bruniaux), Bodhram and Percussions (Andreè Bottiglioni), Flutes (Amélie Grunenberger), Cello (Eleonora Galassi) and Voice (Lucia de Carlo). Vita Dominae is a journey inside the medieval woman’s life, including tunes such as “Greensleeves”, “Douce Dame Jolie”, “Give me your Hand”, “Chanson de Table”, “Scarborouh Fair” and many others from Britanny, England, Ireland, France, Italy, Spain and other areas of the Celtic world.

In March 2013 she also joined Belthane (a Celtic-Fantasy band from Modena) and she toured in Lombardy, Veneto and Emilia Romagna (Italy). In October 2015 she became a member of “Brigantia Belgae” (a Belgian celtic-folk music group).