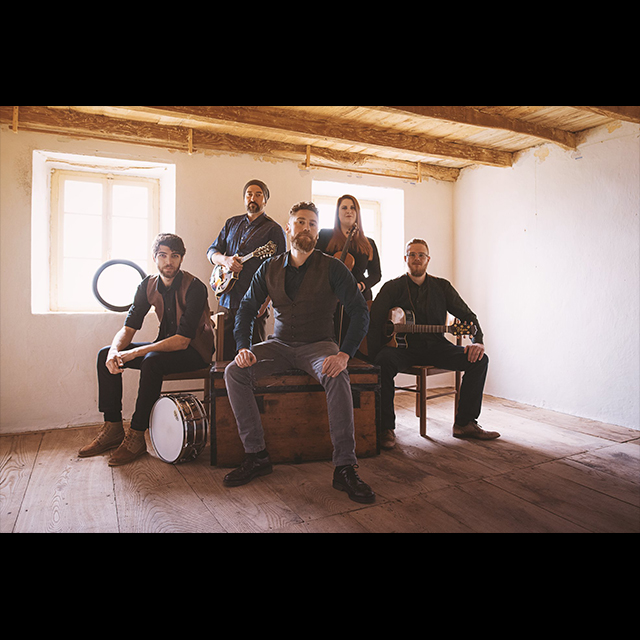 Alban Fùam (from the Gaelic “celebration of light and sound”) is an Italian band whose music describes Ireland by performing captivating Irish and Celtic songs skilfully rearranged with a rather modern flavour and unique taste.

Their music blends together folk, country, jazz and Celtic traditions, producing tunes punctuated with frantic virtuoso violins and nostalgic Irish pub ballads in a riveting multicultural melting pot. The group was formed in June 2009. In 2010 their very first album “Celebration of Light and Sound” was released.

That project was a collection of songs from the Irish and Celtic tradition influenced by groups such as “The Dubliners” and “De Dannan”. Their style of music was refined and rough at the same time. In the summer of 2011 their second album “The Rusty Mackerel” was published. Some of the tracks were enriched by the exceptional performance of Frankie Gavin, the “prince” of Irish violinists and leader of the well-known Irish group “De Dannan” since 1974.

In November 2011 Alban Fuam had the honour to perform a live concert with violinist Frankie Gavin and singer Michelle Lally at Astra Theatre in S. Giovanni Lupatoto, in front of a large audience. The show was sold-out and the following year three of the songs from that live performance were released. On 16th September 2012 Alban Fùam performed on stage as a support act for Frankie Gavin & De Dannan at the prestigious venue “Teatro Romano” in Italy, in front of a massive and enthusiastic audience.

During that time the group had the opportunity to grow technically and artistically. In fact they spent a period in Northern Ireland refining the very heart and foundation of their style of music by attending the award winning “Joe Mooney Summer School” in Drumshanbo. Alban Fuam changed their lead singer.

Pietro Facci has been the new singer and front man since. “The Wild Rover” was their first record performed with Pietro Facci. That cd included some quintessentially Irish pub songs, embellished by the deep and warm timbre of Pietro’s voice.

In 2014 New Year’s Eve concert, the Alban Fuam performed live on a big stage in Piazza Bra (Verona) in front of an audience of more than 40.000 people. They have just signed their first contract with the Italian label Maxy Sound so their first official Album was released in June 2015.

In August 2015 they won the Montelago Celtic Contest which is one of the most popular Celtic Festival in Europe.
The album Whiskey ‘n Beer has been added to the Irish Traditional Music Archive, the most relevant collection of Irish/Celtic music based in Dublin.

The same album reaches more than 500.000 streams on Spotify and tops the world music charts in many countries. Over the following years they record and release on label Maxy Sound another two albums: “From Galway to Dublin” in 2017 and “Galway Girl” in 2018.

Alban Fùam are currently performing about 70 concerts a year and taking part in some of the most prestigious Celtic Festivals like Montelago, Mutina Boica, Druidia, Brintaal, Stadtgartenkonzerte (DE), Festival Maritim (DE).