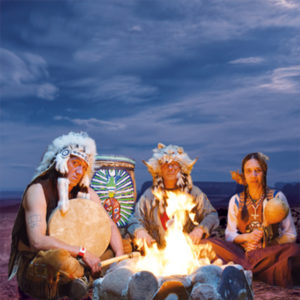 Indian Calling is a music band that was founded by Max Titi and formed inside the Spotted Eagle Camp, a real tepee camp that shares customs and traditions of Native American peoples. Its founders are Max Titi, Gualtiero (Riding a Horse Bajo) and Mauro (Red Wolf). Gualtiero received the gift of the spiritual name and ceremonial rattle directly from Bruce Starlight who is the head of the inter-tribal council of the seven nations and descendant of chief Brokenknife, spiritual leader of T’Suu T’Ina people – also known as Sarcee.Besides Gualtiero and Mauro the other members of the band are Laura (Rattle Woman) and Katjusha (Northern Wind).

In 2007 they released their first CD titled “Indian Calling” produced by label Maxy Sound, which includes popular songs such as White Buffalo, Ly O Lay Le Loya and The Last of the Mohicans. The album was a big hit on the market and the song “The Last of the Mohicans” was performed in 2014 by the band, along with a group of drummers and bagpipe players, in front of a large and enthusiastic audience.

The Indian Calling have been keeping up their live gigs, performing in the camp and in many other cultural events in which they took part. Along with all their activities and their nomadic lifestyle, they found inspiration and time to record many other albums. In 2013 they released “Indians”. This Album includes a collection of traditional songs with a modern twist. Arrangements and sounds stand out for their unique emotional impact.

The CD starts with the song “Yeha Noha” (Wishes of happiness and prosperity). This song was released for the first time by the German group called Sacred Spirit, in 1995. It’s a remixed version of the Navajo Shoe Game song. The song describes the Giant’s (Yé’iitsoh) lament at the owl’s attempt to cheat by stealing the yucca ball. The original myth describes a game played among the day and night animals in which the animals who discovered in which shoe a yucca ball was hidden would win a permanent state of daylight or night. The lyrics of the song are:… shaa ninánóh’aah (you give it back to me)… Yé’iitsoh jinínáá léi’ (… The Giant says again and again…)… ninánóh’aah (…give it back).

The second track to this album is “Lakota Lullaby” which words are “cante’ waste’ hoksila ake istimba, hanhepi kin waste’”: goodhearted boy go back to sleep, the night is good. Dakota (also Dakhota) is a Siouan language spoken by the Dakota people of the Sioux tribes. The big news on this album is a Cherokee version of the traditional “Amazing Grace”, arranged with Native Indian sounds and performed by Alison. “Women’s Brush Dance”, also included, is a contemporary interpretation of the Brush Dance, a ceremony held to heal a sick child or to pray for a long, healthy life for the child. Other than the awesome “Indians”, “Dakota Rainbow”, the striking atmosphere of “At War” and the joyful mood of “Blessed Valley”, the album also includes the big hit tune “Dawa” (The Cradle Song) and the romantic “Zuni Sunrise”, performed on Indian Flute. This work was followed by others: in 2014 “Native American Spirit” containing songs like “My Heart’s Friend (Shoshone Love Song)”, “Cherokee Morning Song” and “Mahk Jchi [Heartbeat Drum Song]” enhanced by warm and soothing Alison’s voice.

Mahk Jchi is a tribute to the great artist Robbie Robertson. Also, in 2014 they released “Native Indians” (Native American Music) that contains many of the soundtracks on the theme of Native Americans such as “Dances with Wolves” and “The Last of His Tribe.” The audiences who take part in their events can get in touch not only with their music but also with their culture and deeply ingrained wisdom. Over the past year they’ve had over five millions streaming on Spotify and Deezer, hundred thousands views on Youtube and several thousand albums sold worldwide on iTunes, Amazon, E-Music and Google Play.

In 2018 the song “Sunset Dance” was included as soundtrack for the film “Black Border Warriors, The Seminole Negro Indian Scouts” which was awarded as Best Film / Video Documentary Production at the Black International Cinema Festival in Berlin and was featured at Cannes Film Festival.

In 2019 the popular Italian brand Acqua San Benedetto has chosen At War by Indian Calling (written by Massimiliano Titi – Max Titi) as soundtrack for their new advertising campaign (TV and other media).

Gald to show you this project made by Italian students with the help of their teachers. The video is a message against violence to women. Stay tuned and happy international women's day!bfan.link/un-mondo-tinto-d-arancio ... See MoreSee Less

The new single track by Patricks is out now. Check it out! #irishmusic #patricks #saintpatricksday bfan.link/step-it-out-mary ... See MoreSee Less

Patricks — Step It Out Mary

Pre save Step it out Mary on Spotify.♦️ NEW SINGLE ♦️⬇ Pre-Save it on Spotify! ⬇bfan.link/step-it-out-mary Our new single "Step It Out Mary" will be out on February 25th!New production, new music, new energy!Always with Massimiliano Titi and his Maxy Sound label ... See MoreSee Less
View on Facebook
· Share

Spotify tells us that 2021 has been a really crazy year for some of our artists.You have added Indian Calling music to 42,051 new playlistsYou heard Indian Calling music for the first time in 41 new countriesYou have saved their songs 47214 times6794 new listeners joined from all over the worldWe've kept you company for 135,000 hoursAlso for TCO it was no less:TCO has been added to 21,768 new playlistsIt was first heard in 59 new countriesThe songs were saved 23114 times2552 new listeners joinedYou've been listening to TCO for 196,000 hoursMany other artists of our team have grown up with us but it would be impossible to name them all.A big thank you and a strong hug fromMax and MonicaMaxy Sound ... See MoreSee Less
View on Facebook
· Share