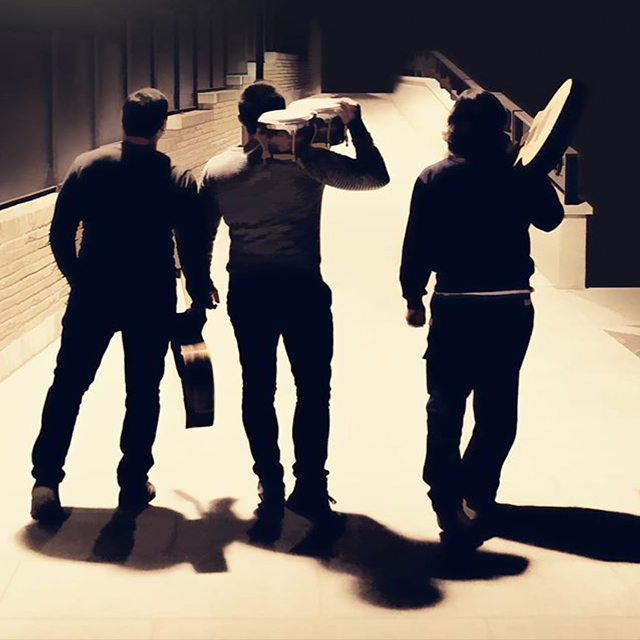 The best rumba flamenca and gypsy music are the ingredients of “Gypsy Sound”. The secret of the movement of rolling and unrolling of the hand in flamenco dancing is to get the apple, eat apple and throw the apple.
“Manzana” (apple in Spanish) is the symbol of the identity of TrioManzana. Their passionate music sound is influenced by Flamenco, Spanish Rumba and Gypsy Music.

The album is the first official album of TrioManzana and has just been released by the record label Maxy Sound. “Gipsy Sound” includes ten tracks in which the guitars and percussions interact reinterpreting some of the classics of these three music genres.
Rumba, flamenco, and gypsy atmospheres are enlightened by the technical skills of the trio that has already captivated the north-eastern part of Italy with numerous gigs in the best clubs. “Gipsy Sound” features some reinterpretations of Paco De Lucia and Santana’s tunes but also “Lambada” by Kaoma, “Alturas” by Inti-Illimani and “Tamacun” by Rodrigo y Gabriela (who have already shown their appreciation for this local band).

“The Last Rumba” stands out amongst the other tracks as it is an original song composed by the band. The album is a combination of joy and freshness that is also reflected in sympathetic video shots by the guys during the recording sessions in the studio and in their numerous live gigs.

TrioManzana is a multifaceted and eclectic acoustic trio that have a deep love and true a vocation for music. Their repertoire of music ranges from a modern and a bubbly taste of folk music namely from the Mediterranean region, from Spanish rumba to flamenco and from Greek traditional music to manouche.
Their trademark is a perfect alchemy between calm arabesque melodies and the typical swirling and addictive rhythm of the Spanish rumba.

The members of the band are guitarist Alfredo Capozucca, who after a few years of research has realized that he favours the virtuosity and improvisation of gypsy sounds above all other music genres; Lucas Dinarte Patricio, a Brazilian percussionist who has been played bongos since the age of 13 and he is the blow-hard of the band; Daniele Prolunghi, a former heavy metal bassist that has become very passionate about the Mediterranean rhythms due to a physical and personal journey of discovery that allows him to favour this music genre above all others nowadays.